Looking to learn Terraform? We break down Terraform best practices and resources to further your learning journey. From Terraform to DevOps: A Modern Revolution

Before we can even begin to dive into Terraform best practices, we need to take a step back and look at the modern-day revolution that is DevOps. A long, long time ago (actually, more like 10 years ago), it was once an IT tradition to have two separate teams in an organization: the development and operations teams. The development team was tasked with handling the code and design, as well as making sure the right product was deployed with functional code. On the other side of the office was the operations team, who were exclusively tasked with checking the operation of the code, its performance, and creating bug reports to fix errors. As with many silos, unnecessary workflows were created, with one team unnecessarily pushing code to the other due to communication gaps. Eventually, a new process was created: DevOps.

DevOps is a process that merges the two teams, their practices, and tools, ensuring that an organization may deliver the product at a rapid pace without compromising on the quality of the product.

Over the years, this simple process has improved and revolutionized the complete development process of a product. While initially created to remove the communication differences between the two teams, it has now transformed into a very widely used, continuous concept right from planning the product, all the way to production and then for change releases.

It’s key to remember that DevOps is about people, process, and how those operational processes can create value for developers. Another key takeaway: teams lose their most precious resource, time, when DevOps isn’t implemented or is implemented badly. 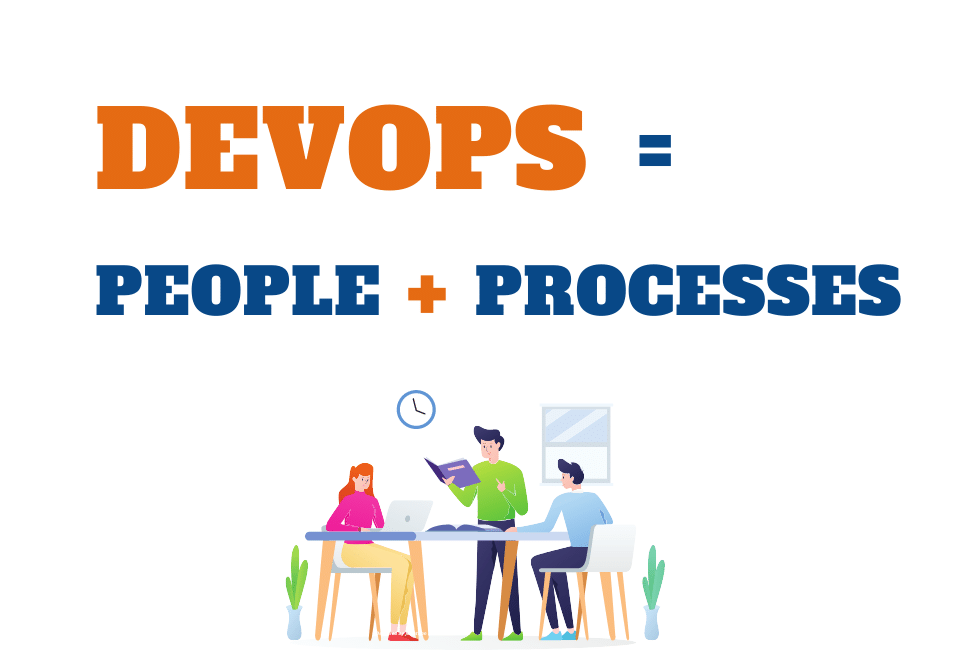 While DevOps isn’t only a set of tools, there are some helpful tools when it comes to DevOps:

These tools create the foundation for the conversation.

Should you embrace DevOps or Terraform first? Whenever such a question comes up in an engineer’s mind or in an organization, it is always important to remember that Terraform is just a tool, while DevOps is a complete process that involves skilled people. If you as an engineer or as an organization do not understand and accept DevOps first, irrespective of which tool you use, the chances of failing are higher. Therefore, when you plan to move towards DevOps as your development process, you should understand and embrace the process first and then the tool that you will be using. For a complete breakdown of Terraform best practices, check out our recent blog post "5 Pieces of Advice: Terraform Best Practices" to go more in-depth.

Terraform Tutorial Basics Pt 1: What is it?

The main advantages that IaC offers can be summarized as:

1. Efficient and Robust SDLC: The infrastructure can be scripted once and used any number of times without wasting additional time and effort on manual configurations every time. This allows developers to focus more on application development.

2. Enhanced Security: Since the complete architecture gets provisioned as code, the deployment remains constant and no additional resources have to be deployed for change approvals or review.

3. Faster speed with consistency: IaC enables the omission of manual process and hence, the wait time for the admin or operations team to set up and manage infrastructure manually gets eliminated completely. The consistency is never lost throughout the process, as any changes can be applied globally without having to worry about the system configuration changes.

4. Cost Efficient: We can have a very precise environment for our development and testing whenever we need it, and not pay for it when it is not in use. IaC also ensures the reduction in repetitive work for the engineers and also helps in reducing cloud computation costs by taking down the unused resources and environments.

5. Greater experience for customers: By deploying infrastructure as code, we are ensuring that the same rules and versioning as the code are applied to infrastructure as well. This reduces any errors or system downtime that could occur due to a change in system configurations.

Terraform is an open-source tool that is specifically dedicated to creating, modifying, and even deleting infrastructure on cloud, focusing on “Infrastructure as Code.” It was first released in July 2014 by Hashicorp and allowed for users who attempt to build their infrastructure to employ a declarative language known as HashiCorp Configuration Language (HCL), as well as JSON. It was written in “GO” language and can work on most of the major operating systems such as Linux, Windows, macOS, Solaris, and so on. Over the past few years, many Terraform best practices have started to spring up from frequent users. We encourage you to explore those and keep your eyes open to any helpful resources.

HashiCorp is a pioneer in DevOps and Infrastructure as Code. They have created process improvements and revolutionized the DevOps space in highly impactful ways. The HashiCorp “boom” that is spoken about in DevOps circles didn’t happen overnight--it was 10 years in the making.

Cloud is now the backbone of an IT environment and over the years, has been helping every IT company, whether small or big, in transforming their capabilities and offering various advantages over conventional setups. One of many Terraform best practices is to first select a cloud service provider. Let’s look at a few of the major advantages that cloud service providers provide:

2) Terraform Commands
Once you’ve familiarized yourself with which cloud provider you’d like to choose, it’s important to learn commands as the next step in your Terraform tutorial. While many tutorials will provide you with a tedious list of commands that you may not need at first, here’s a simplified list of the top 5 commands you’re likely to use when deploying infrastructure. Visit our Terraform Tutorial Guide if you’re looking for a more in-depth explanation of each command. 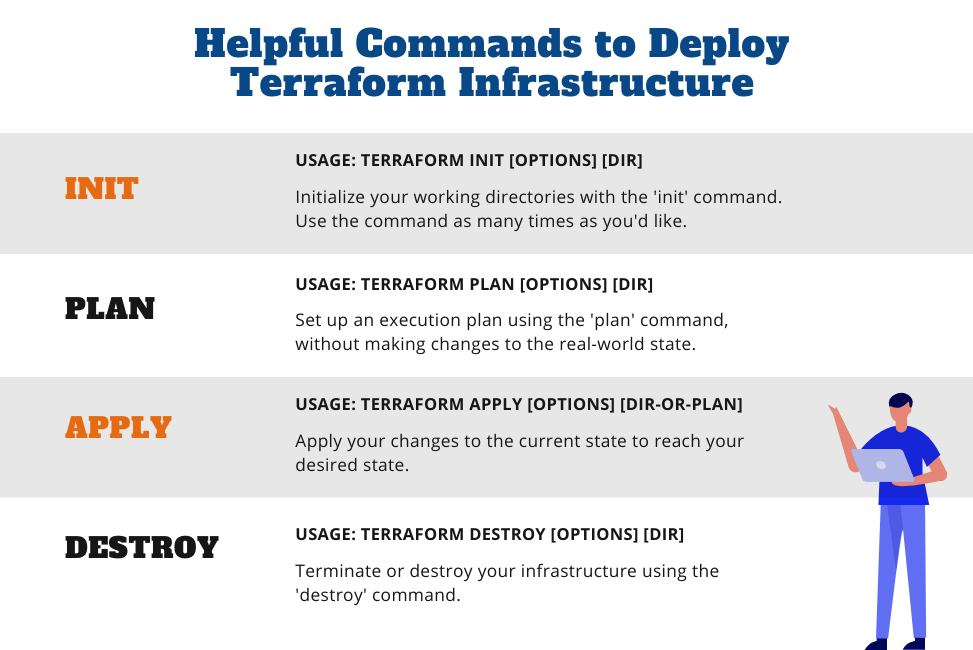 Before we dive into syntax, we want to share some Terraform best practices with you: watch syntax rules closely. Because Terraform is syntax-sensitive, it’s important to get your syntax correct early on, to avoid future problems. Syntax consists of blocks, arguments, and expressions. A block is a container that holds onto the configuration of an object or resources. Within a block, basic statements known as arguments occur. Lastly, expressions are values which you may find under arguments or see as a subsection of other expressions.

Some other major advantages include:

Everything is controlled on an easy-to-use command-line interface with simple commands. If you’re enjoying this Terraform tutorial and are interested in a complete list of commands, check out here.

5) Other Resources
When it comes to being a practitioner, it is always good to keep in mind a set of Terraform best practices that you may follow. If you’d like to discuss these practices or need any support, you can join our Slack community to meet other DevOps professionals and continue the conversation.

Though the usage and growth of IaC have been exponential, it is still a concept that is being figured out by many organizations on how and where it fits into their DevOps process. As a small and medium business, you may watch every Terraform tutorial on earth and still fall short of your goals. The major challenges that come up with Infrastructure as Code are:

1. Dependence on Coding: Infrastructure in such cases is highly dependent on the developer's coding skills and their knowledge in languages such as JSON, HCL, YAML, etc., which are commonly used for IaC. This means that such efficient programming resources need to be available in the organization. This also means that simply watching or reading a basic Terraform tutorial might be difficult for those who don’t code. While Terraform documentation is clear, there’s still room for improvement to better fit the needs of small and medium-sized businesses.

2. Monitoring: As an organization, additional and efficient tools will have to be dedicated to tracking the provisioning of resources. The major tracking required here would be: “who” provisioned the resource, “what” was provisioned, and “how” much does it cost to have the resource.

3. Human Error: Though most of the process is automated, we still have humans writing the parent or source code. This leads to the possibility of minor human errors such as duplication. There is no Terraform tutorial that will eliminate human error from the equation. As a side note, we also have to make sure that the changes to the configuration have no outside interference.

While we can’t eliminate the fallibility of mankind, we can try to make Terraform easier to use for small and medium businesses, through an open-source solution that puts the power back in the hands of you, the developer. You can use our CLI to create a custom HCL file that fits your exact specifications.